At San Quentin State Prison, there are a variety of spaces for incarcerated people to practice their faith or spirituality. The sweat lodge serves as a space for the Native American population.

Gregory "White Eagle" Coates says that when the door of the sweat lodge at San Quentin State Prison is closed, it’s hard to see much.

“When that door is closed from layers of blankets, you don't see any light other than the redness of the rocks. That's when we connect to the unseen world.”

Inside, people pour water on fire-heated rocks. The rocks represent the ancestors. Then the lodge heats up and the men start to sweat. That sweating is an act of deep purification.

“You connect with a time, a place, a way that was beyond measure,” says White Eagle. “You relax, you're able to pray and think about people that are no longer here.”

Once the participants are purified, the Fire Keeper - who stands outside the sweat lodge - opens the door and hands in the Sacred Pipe.

“When we use that pipe, it's a connection above to the creator and the smoke that comes out of it there's no self-gratification out of it,” White Eagle explains. “When you blow that smoke out of that pipe you're saying prayers, you're offering your prayers to the creator.”

The sweat lodge is located on the edge of the prison yard, right behind the baseball field and next to the laundry room. It's about the size of two basketball courts side by side. It's fenced off. There's fruit trees, flowers, and herbs; it's like an oasis in the corner of a prison. It's only the place where incarcerated people are allowed to use tobacco and have a fire. Only incarcerated Native Americans are permitted to use the space.

From Alcatraz to San Quentin

In the late 1960s and early 70s, Native Americans were organizing across the country for their right to practice their religion.

Hector Frank Herridia is the Native American spiritual adviser at San Quentin. He says that the sweat lodge at San Quentin was the first one to be installed in a prison.

“The first Native Americans inmates they started as a club and they were working out of their cells, out of their housing and eventually, they got together and wanted to have a Sweat Lodge and we had a lot of Native American spiritual leaders on the outside come in here and started talking to 'em and then that started that in motion.”

At the same time, activists occupied Alcatraz and built a sweat lodge at the former prison just a few miles away from San Quentin. They eventually marched all the way to Washington D.C.

Then, in 1978, President Carter signed the American Indian Religious Freedom Act, which protects the rights of Native Americans to exercise their religions. The Act promises access to religious sites, among other stipulations. After the act was signed into law, Native American inmates at San Quentin petitioned the warden to set aside a space for them to use.

During their occupation of Alcatraz, activists had built a sweat lodge on the island. When the occupation came to an end, they needed to take that lodge down. So, they moved the sacred coals and wood from Alcatraz to San Quentin.

Herridia says the lodge has brought incarcerated Native Americans together.

“It was the Universal way of bringing our people together into this hoop, mending the hoop as they said.”

White Eagle arrived at San Quentin the same year the sweat lodge was built. He says that elders appointed a man named Archie Fire Lame Deer to come inside to help build the lodge.

“He went in there and saged the whole thing down with sage and a Eagle wing, he had a huge Eagle wing,” remembers White Eagle.

Then, the lodge was put together in four sections.

“The West and the East direction were tied four poles, four willows,” explains White Eagle. “Then they brought the North and South directions together. Sixteen all the way around, each one has a prayer.”

The willow sticks form the skeleton of the hut, which was then covered with blankets. After the sweat lodge was complete, White Eagle took part in his very first sweat lodge ceremony.

“We went around the fire, ask Archie permission to enter the lodge. As we're going in, our brother's saging us off again with an Eagle feather and a sage,” White Eagle says. “We get down on all fours; that's to show that we are humbling ourselves, that we're no better than anything else the creator has created.”

White Eagle says that before he came to prison,he had no connection to his Native heritage.

“I'm what they call a sidewalk Indian,” he explains. “Because before I come into incarceration I didn't know these ways. I never participated in these ways, so for me to share these things, sometimes it's hard because I'm nobody these guys were from reservations, I was from the city.”

Now, White Eagle goes into the sweat lodge almost every week. He's not eligible for parole any time soon, but he's finding his way home through this spiritual practice. Herridia says that's true for a lot of Native Americans at San Quentin. Many of them didn't grow up with their tribe's traditions. But here in incarceration, at least they are able to learn this one.

Uncuffed, formerly San Quentin Radio, is a project in which KALW editors train incarcerated people to report stories from inside prison. A CDCR official listened to and approved the audio for this story prior to broadcast. 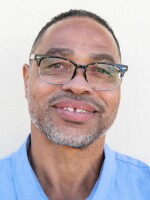