Arts & Culture
@WORK
COVID-19 has fundamentally changed how we work. For some, that means heading to a kitchen table instead of an office. Others have found themselves unexpectedly on the frontline. And for many, the pandemic has led to unemployment or underemployment. In our ongoing series "At Work," we hear from folks in the Bay Area about how what they do has changed.

I’ve been coming to this serene sanctuary sporadically for the past 20 years. But I became a real regular during the pandemic. It provided some relief from the day-to-day chaos, some sensory delight and peace of mind in a period fraught with fear.

So I wanted to meet some of the people who manage the garden and find out how they’ve navigated the challenges posed by the pandemic. People like Steve Garry. When I speak with him, he’s helping to put the final touches on a new irrigation system.

“I was born on a ranch in the Central Valley and we had, like, 350 acres at one point of nectarines, peaches, plums,” he tells me. “And so I'm familiar with that kind of agriculture. Now roses, that’s a little different story.”

Steve’s been volunteering at the rose garden for the past seven years.

“My grandmother had zinnias and things like that. Roses, I didn't really have an acquaintance with,” he says. “But I've gotten acquainted, I’ve got some roses at home. They tell you, you know, when you're okay and when you're not doing okay. They're pretty hardy. They're amazing.”

“I'm a gardener by location,” states Jane Bicek, another volunteer. “I used to walk through the rose garden to go to the casual carpool to work in San Francisco. So after I retired, I thought I should give back to the public space.”

When I meet Jane, she and several colleagues are busy weeding near the garden’s reflection pool.

“And we do have a consulting rosarian that comes every day and works,” she says. “He's our teacher.”

A rosarian? I’d never even heard the term. But I had seen an older gentleman in jeans and a wide-brim hat around here for years, tending to the rose bushes, whether or not they were in bloom. I’d often wonder what his story was.

“I'm Royal Krieger,” he tells me, when I meet him on one especially gorgeous afternoon. “My wife and I bought a home in the late ‘70s. She wanted a little rose garden. And that soon became about 50 roses. And the gardener said, ‘I’m not too sure about taking care of these.’”

Royal ended up attending a rose pruning demonstration put on by the East Bay Rose Society at the Morcom.

“Probably about four or five years later,” he says, “I was one of the participants giving these demonstrations.”

He tells me his career had been in the business world.

“But then as I started to divest myself about ten or so years ago, that led to my being the rosarian here, which is, I'll tell you, the happiest hours of my day.

In reaching out to the volunteer group, I kept running across the term “Dedicated Deadheaders.”

“Anyone can be a volunteer,” Royal says, “but to be a deadheader, I have basically a program to teach to make sure they have enough knowledge to be dangerous enough to turn them loose on their own.”

I’m city-raised, and the antithesis of a green thumb, so I needed some clarity on what, exactly, deadheading entails. Because I genuinely thought the name was a reference to the Grateful Dead and the senior volunteers’ shared enjoyment of their music! Not quite.

“So deadheading is, after the bloom has happened, we want to remove that spent bloom,” he clarifies. “And typically we want to go to the first or second five leaf, and we’re going to cut above at about a quarter of an inch. That’s now going to stimulate a new growth at that point. As long as we keep deadheading, we’ll keep stimulating the plant, and we’ll keep getting more bloom.”

I wonder how quickly someone can learn to deadhead properly.

“This is a skill that, frankly, takes time,” Royal responds. “And the more skilled that you get, especially with some of the more complex roses, then you'll know in time–not only am I pruning for the next bloom, which might be five, six, seven weeks from now, but I'm also pruning down the line even for future years.”

He says it’s an art.

“Think of it in a way that people become masters on bonsai. That’s what happens here. And that's really an advanced level of great joy. And I always love to teach people those aspects.”

Walking these grounds always brings me great joy. It also feels a bit like time travel, especially when I pass by the cascading fountain.

Royal shares with me some of the garden’s history. “The city acquired the property about 1915 at the behest of a men's garden club. And then in 1932 to ’34, it was a WPA project.”

Shifting to the current state of Morcom, and what distinguishes it from comparable public gardens, Royal says, “You'll find they have pretty much all the same roses. I call them mommy pleasers.”

But Royal tries to introduce new ones to the Morcom every year. There are more than 2,500 roses in the Florentine area of the garden.

“We have quite a few very, very rare roses,” he says. “In a couple of cases, we believe we probably have the only ones in the world.”

Some of his favorites? The Blush Noisette, introduced to the public in 1814, and ones with unusual colors, like Loco Coco and Honey Dijon.

“And then I love the more complicated roses and climbers that we have; the largest one here is Mermaid and she's got about a 40 foot spread now.”

And what, in Royal’s opinion, is the most fragrant rose here?

“It's a French rose,” he says. “De la Grifferaie. It only blooms once a year, you just missed it. And you can smell that baby about a block away. It's lovely. A big show off.”

Royal says some of the most serious enthusiasts actually poke around abandoned cemeteries and old homesteads, looking for roses that may have been planted by a gravestone a century ago or more. If they find one and it can’t be identified…

“It’s then called a ‘found rose.’ And the person that found it has now the pleasure of naming the rose. And so this one,” Royal says, pointing to a series of three blooms at the Northern edge of the Florentine, “is Huntington Pink.”

Royal believes this rose is only found here and at the Huntington Gardens near Pasadena, from whom the Morcom received its cuttings.

As we continue strolling, I ask about the public’s use of this space.

“One of the busiest times is during prom season,” Royal replies. “Fridays, and certainly Saturday nights, we'll have as many as 500 plus kids and their parents, coming from distances of Vallejo and Fremont.”

They gather to have pictures taken before hopping in their limos and heading to the City. He says there are lots of weddings and quinceañeras too.

“Certainly, the neighbors and the elderly, it's here for them as well,” he continues. “You can see there's many places where it's very quiet and tranquil and beautiful, and a lot of people come, they’re grieving for whatever reasons. And this is a wonderful place for healing, too.”

Which is why so many people, myself included, spent so much time here these last two and a half years.

“It was like Grand Central Station during the pandemic,” volunteer Jane Bicek says. “I had never seen so many people come down here!”

“We had to kind of police the place a little bit, but that sort of sorted itself out,” Royal adds.

What other challenges were they faced with?

“And then, not long after that,” Royal shares, “we had this turkey that went rogue.”

Ah yes. The infamous turkey who took to terrorizing the garden’s visitors.

“He started to chase and then attack people,” Royal states. “This guy, he was a pit bull with wings!”

“Of course, that humanized this clown,” Royal continues. “And needless to say, Gerald and I bonded, and not in the most friendly way. And it was a serious, serious problem. A lot of people were seriously hurt. We made our mark on the map and not exactly the way I wanted it.”

I could sense Royal’s slight discomfort discussing the turkey problem, but gently pressed him to tell me more.

“Having gotten to know some of the animal rights people,” he confides, “I have to be very careful here.”

Essentially, turkeys can tear up garden beds and pluck off new growths.

“Not to mention all the poop that they do,” Royal adds. “So, yeah, they’re attractive in one sense. But for a rose garden, they're a serious problem.”

Wildlife Emergency Services eventually captured and moved Gerald to wild land near Orinda, and Royal tells me that the couple turkeys that come around now are a lot less aggressive.

So, he and the other volunteers have managed an errant turkey, cursed an elusive rose thief, and welcomed visitors in record high numbers–all with very little money.

“The city does not provide us any funds for roses, any of the basic materials like that,” Royal says.

Instead, several growers donate some of their stock when they can, and the garden fundraises for more.

“In its day, at one point, we had eight full time gardeners,” Royal adds. “It was immaculate. It was beautifully groomed. The city today has limited resources. Frankly, we're lucky to have a half-time gardener.”

And so they need these volunteers to keep the weeds down, and the spent blooms trimmed.

“As long as we deadhead,” Royal tells me, “they'll continue to bloom. And we do that. And you can imagine with 2,500 plus roses, and let's say every rose just getting five, that's 12,500 a month. So that's a lot of work. And we obviously just have a handful of people–but we do the best we can.”

Despite limited means, it’s clear to me that Royal, the dozen Dedicated Deadheaders, and the broader volunteer group are all deeply committed to preserving this garden as a place of joy, connection, and colorful contemplation. 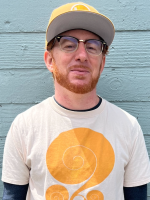