Arts & Culture
@WORK
COVID-19 has fundamentally changed how we work. For some, that means heading to a kitchen table instead of an office. Others have found themselves unexpectedly on the frontline. And for many, the pandemic has led to unemployment or underemployment. In our ongoing series "At Work," we hear from folks in the Bay Area about how what they do has changed.

A Musical About Jennifer Doudna, The Nobel Prize-Winning Biochemist

The COVID-19 pandemic made it difficult to be a live performer. Many musicians and actors found themselves performing online or not at all. But, for at least one Bay Area man, the pandemic did make it easier to do something he had always wanted to do: write a musical. KALW’s Isabella Nguyen Tilley has more for our series @WORK.

“I mean, every great musical has this love song … And I thought, what if I could write a love song to nature, what if Jennifer could do that?”

Athena’s Island uses songs to chronicle Doudna’s life, from her childhood moving to Hilo, Hawai’i, from Washington, D.C., to winning the Nobel Prize in Chemistry in 2020. One of those songs is “Double Helix,” a love ballad about nature, sung by the fictional Doudna.

“Every great musical has this love song, usually a woman singing about a man,” Hudelson says. “And I thought, what if I could write a love song to nature … and kind of make an untraditional musical?”

Hudelson found this unlikely hero in Walter Isaacson’s book The Code Breaker. The characters and behind-the-scenes drama of the development of CRISPR drew him in, but Hudelson really connected with Doudna, and her personal and intellectual growth.

“Her father, who is this professor, he got melanoma,” he says. It was 1995. Doudna had just become an assistant professor at Yale a year earlier, and that fall, she flew back and forth from Connecticut to Hawai’i to be with her father. “And sitting down with him, he would ask her about her studies.”

Doudna and her fellow researchers were close to pinning down the shape of RNA. Talking about her research with her father helped Doudna become a better professor.

“So I think that really inspired me and I connected with the teaching aspect of it,” Hudelson says.

This story of a young teacher inspired Hudelson because, actually, he doesn’t write musicals for a living. He’s a high school teacher— and has been working in education for more than 20 years. He teaches English and drama at Mills High School in Millbrae.

For Hudelson, teaching is a little like jazz, or improv. “I love the spontaneous aspects of teaching. And you can have a lesson plan and you plan all these different things out, but it's so organic, it's happening in the moment,” he says. “It's one of the things I miss about live teaching.”

Because of COVID-19, he didn’t get to see his students in-person. To shake up online learning, he decided to teach them how to make a play. And while he taught them the process, he realized...

“Well, I want to get published. And I want to write my own thing.”

So he started writing Athena’s Island.

In the spring, the school switched to a hybrid of online and in-person, but most students stayed virtual. Hudelson found himself alone in his classroom a lot, without much to do in between Zoom classes. “I have a guitar in my room. So I quickly went over to the music directors like, Hey, can I borrow this piano? … And it was easy just to kind of crank out a song here and there.”

What next? First, he shared it with his close friends and family. Then, he shared it with Mills High School music director, Dave Gregoric. “You know, I thought, someone that musically literate would just say ‘this isn't very good’ but he was excited from the get go,” Hudelson says.

Hudelson, Gregoric, and their students will stage two in-person, outdoor performances in late September. Gregoric is co-directing the musicians with Hudelson, and together they’re arranging the songs for an ensemble.

“I might be like a mechanic, and [Hudelson] design[s] the engine,” Gregoric says. “We just are fine tuning all this stuff. It's really some brilliant stuff in here.”

Until school starts, the students are mostly practicing their parts on their own. But I do get to attend one rare, in-person summer rehearsal.

In the same bandroom where I met Hudelson two weeks earlier, five masked teenagers sit at a table and buzz with energy and sass. Hudelson, sporting meticulous glittery nail polish, teaches the melodies and accompanies them on guitar, while Gregoric experiments with harmonies.

“I am super excited honestly to do an original concert musical here at Mills,” says Shree Singh, a rising junior who will play the roles of the narrator and Eldora, Doudna’s “feisty best friend” and attorney. “And to be doing it on something very close to my heart which is biology, biochemistry, it’s really going to be a fun ride.”

Doudna will be played by Madison Schoening, a rising senior. At rehearsal, she stands up to belt out a fabulous performance of “Double Helix,” the ballad of the musical.

Teacher Joe Hudelson wants Athena’s Island to inspire a new generation of scientists. “She was someone who one day was a little kid, a little girl who dreamed about being a scientist … And that normal person … could grow up to be this superwoman,” he says. “So I think the message here is that anyone of you, anyone in the audience, could be that person.”

And, he’s excited for this production to bring everyone back together.

“We wanna put something on right away when we get back to school to welcome people back into the community, and I think this is a perfect theme, like get your vaccine, support science!”

And what better way to bring community back together than creating something from scratch? 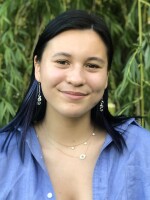