SRO Stories: "I’m adapting to being around other people"

The housing of last resort for a lot of people that would otherwise be homeless are SRO’s, or single room occupancy hotels.

Around 19,000 people in San Francisco live in these dorm-style buildings, though many of them have been demolished over the decades. Today, as part of our week-long series, SRO Stories, we’re going to meet Robert P. He lives in an SRO in San Francisco's Tenderloin neighborhood.

Robert: I'm adapting to being around other people. It's been a long time since I've had interactions with people who are not trying to steal my backpack . . . When you live out in the park for a long time and people get to know you, they start to get to know where you go and stuff and so things disappear.

This piece was produced by Colin Peden as part of a project with Delivering Innovation in Supportive Housing (DISH), a project of Tides. This project was made possible with support from California Humanities, a non-profit partner of the National Endowment for the Humanities. More profiles will be featured in a project exhibition in the Jewett Gallery at the Main Branch of the San Francisco Public Library starting December 17th thru March 12th, 2017. An opening reception will be held on January 10th. Visit bit.ly/dishexhibit to learn more. 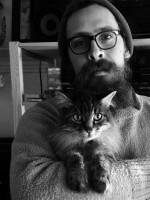