On Saturday (3/31) from 6:30 - 8:00 pm, Bluegrass Signal producer Peter Thompson hosts Bay Area banjo players Larry Cohea, Bill Evans, Avram Siegel, and Ryan Breen to honor and reflect on the contributions of Earl Scruggs, who died on Wednesday.  As a member of Bill Monroe's "classic" Blue Grass Boys, co-leader with Lester Flatt of the music's most influential band, the Foggy Mt. Boys, and fearless explorer of the progressive sides of bluegrass with his family band, Earl Scruggs changed the way people played and regarded the banjo.  His "Foggy Mountain Breakdown," featured in the film Bonnie & Clyde, and his music for The Beverly Hillbillies TV show brought his music to the attention of millions, but banjo players have always known what Sammy Shelor once said: "Without Earl Scruggs, none of us would be here." And many bluegrass fans share the reflections of John Hartford: "The first time I heard Earl on the radio, I didn't know what to think. I couldn't tell if it was a banjo or electric guitar or if it was lightning bolts from heaven." You can hear Earl Scruggs again on the radio this Saturday. 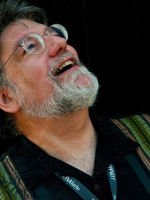 Peter Thompson
Peter Thompson's first radio-like experiences involved recording concerts (hand-held mic + cassette deck), making mix tapes for friends and attending/hosting listening parties with other enthusiasts. These proclivities found a broadcast outlet at Vancouver Co-op Radio, where, starting in 1975, Peter not only produced a wide variety of programs but also served as Program Director and Music Director. For many years, Peter also was a freelance producer for CBC Radio, and taught in a college media production program. Following a move to the Bay Area, Peter hosted programs at KCSM and KPFA before launching Bluegrass Signal on KALW in October 1995. Since 2004, the program has been syndicated on WAMU's Bluegrass Country.
See stories by Peter Thompson
Sponsorship for Local Businesses
Special rates and packages
Learn More
Submit Your PSA
To support the inspiring work of non-profits and community organizations in the Bay Area, KALW broadcasts Public Service Announcements (PSAs). PSAs are…
LEARN MORE