As winter weather moved into San Francisco, Mayor London Breed had some chilly news for restaurant owners and their patrons. “Sadly, beginning the end of the day Friday, we will need to eliminate indoor dining” Breed said.

The change comes as COVID-19 cases surge nationwide. Grant Colfax is the Director of Health for the City and County of San Francisco. “We have seen cases increase by 250% since early October" Colfax said.

That’s about 80 new cases every day in San Francisco.

A study published Tuesday in the journal Nature shows that a small number of places such as restaurants account for most infections, essentially because they can be crowded and people tend to linger.

“With winter on the way, limited indoor dining represented the only real hope for many restaurants to survive the next three months.”

To help restaurants get through these tough times, San Francisco announced a $3.5 million expansion of its small business loan program this week. Altogether the city says it has identified more than $20 million in grants and loans for small businesses since the start of the pandemic.

Still, an economic impact report by the online review site Yelp found that thousands of businesses have closed since the city first issues its shelter-in-place ordinance back in March. 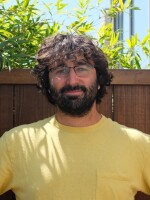 Azul Dahlstrom-Eckman
I was born and raised in the Potrero Hill neighborhood of San Francisco. Upon graduating high school, I left San Francisco to pursue a bachelor's degree in Environmental Studies at the University of Oregon in Eugene. I’ve worked as an arborist, bicycle mechanic, carpenter, zero waste educator, whitewater raft guide, and a freelance reporter for the Potrero View newspaper. My passions include everything outdoors, showing off my favorite spots in San Francisco, and most recently, swimming in the Bay. I look forward to joining the KALW news team as an Audio Academy fellow and using my time there to the fullest.
See stories by Azul Dahlstrom-Eckman
Support the next 80...
DONATE NOW!
Welcome (Back) to Mannys
Tune in for a Three-Part Series about the Future of San Francisco. Thursdays in May at 6pm.
LISTEN
Introducing STATE OF THE BAY!
New name. Same local and live conversations.
Every Monday at 6pm.