California officials bracing for long lines are urging patience as voters cast ballots on “Super Tuesday” in what could be record turnout for a presidential primary election. A fraction of the 20.7 million registered voters in the heavily Democratic state has already returned ballots in early voting. Early voting started last month, but officials expect the bulk of ballots to be cast Tuesday. Enthusiasm is high for the election, which was moved up from its usual spot in June. But the election also coincides with a number of changes aimed at expanding voter participation and those changes may end up confusing voters or contributing to longer lines.

California Democrats looking for a candidate to defeat President Donald Trump will pick from a suddenly reshaped presidential field. California is one of 14 states voting on Super Tuesday. It’s the biggest prize by far, with more than 400 delegates at stake. The vote comes a day after Amy Klobuchar and Pete Buttigieg united behind Joe Biden as party moderates look to halt the ascent of democratic socialist Bernie Sanders, the leading candidate after contests in Iowa, New Hampshire, Nevada and South Carolina. Biden was expected back in California on Tuesday, with a scheduled visit in Oakland. Elizabeth Warren campaigned Monday near Los Angeles.

Throughout the state, voters are picking through 101 legislative contests. They range from a battle between two Democratic dynasties to nasty infighting among outnumbered Republicans. Lisa Calderon is running to retain her family’s hold on a Democratic seat in Los Angeles County. Her opponents include Sylvia Rubio, who is the sister of two Democratic state lawmakers. Meanwhile, a nasty fight within the Republican Party is playing out in Orange County, where the incumbent faces a challenge from a former state senator. And former Assembly Republican leader Chad Mayes may find himself the odd man out Tuesday while running as an independent in Riverside and San Bernardino counties. 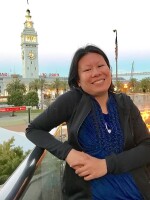 Jenny G. Shao
Jenny G. Shao is a freelance multimedia journalist. Her reporting background is largely local and general assignment but has included community advocacy and crime. As a native San Franciscan, she has a particular interest in all things San Francisco Bay Area. Her experience comes predominantly from citizen journalism for TV broadcast news and video for social media. Jenny joined KALW’s team in February 2020 as the only video specialist and primary photographer.
See stories by Jenny G. Shao
Latest from NPR
Voices from behind prison walls.
A show made by people behind bars in California prisons.
Listen now
This Season on TSE: Becoming Muslim
Check out the latest season about Muslim converts and past seasons of stories of struggle and never giving up hope.
Listen Now