How Printer Companies Are Locking People Into Loyalty

Maybe you found yourself angry, ready to scream at your office or home printer. It should work. The ink should be in there, but it gives you a message telling you to go buy more. Well, guess what? That's all part of the plan. Amanda Aronczyk, from NPR's Planet Money podcast, explains.

DELORES WILLIAMS: Oh, I don't even like to think about it.

ARONCZYK: She bought it back in 2015 to print photos of her grandkids.

ARONCZYK: You have 14 grandkids.

ARONCZYK: And one day, when she went to print, instead of cute photos, her printer spit out blobs of color.

WILLIAMS: And it gave me an error message.

ARONCZYK: Do you remember what it said?

WILLIAMS: Yes, that I needed to change my ink cartridge. And I knew better.

ARONCZYK: She had just bought a new ink cartridge, and she was pretty sure she clicked OK on all the updates. So she called up HP's helpline.

WILLIAMS: Meanwhile, in between all of the troubleshooting, they're saying, well, you really should get a new printer.

ARONCZYK: So Williams buys a whole new printer. But she can't stop thinking about what went wrong with printer number one.

WILLIAMS: Finally, I said, oh, let me just do some research on this printer.

ARONCZYK: Williams discovers that the problem was her new ink cartridge. She'd bought a cheap knockoff brand. It worked fine for a couple months. But turns out that months before, HP had sent some kind of update to thousands of printers like hers.

CORY DOCTOROW: Six months later, the printers all reject third-party ink, right? It was a timer. It was a countdown.

ARONCZYK: Cory Doctorow is an activist and adviser for the Electronic Frontier Foundation. He says HP sent an update instructing printers to reject knockoff ink cartridges. And they do this kind of thing because of their business model. They sell some of their printers for cheap and then make money selling their brand of ink over and over. So knockoff ink is an existential threat. And as printers become smarter, the companies have more and more ways to try to lock you in.

DOCTOROW: We have entered this bizarre digital world where a company's design choices can allow it to sort of rest its cold, dead hand on your property long after the title transfers to you, and it can really punch you in the face.

ARONCZYK: That's how DeLores Williams felt. So she ended up helping launch a class action lawsuit against HP. In 2018, the company settled for $1.5 million. Today, Williams still has that second HP printer she bought, but she doesn't have to buy ink cartridges for it anymore. She caved and signed up for a subscription for HP-brand ink - $3 a month.

WILLIAMS: Every time I see it on my account, I get angry.

ARONCZYK: HP wrote to us to say that this subscription service can save customers 50% on ink, and that they offer customers a range of printer and ink options to choose from. This is the relationship that printer companies have always wanted with customers like Williams - monthly fees and required loyalty.

WILLIAMS: Right - I'm stuck unless I want to go out and buy another printer, and I don't want that.

ARONCZYK: She already has two printers. She does not need a third. Amanda Aronczyk, NPR News. 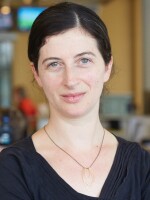 Amanda Aronczyk
Amanda Aronczyk (she/her) is a co-host and reporter for Planet Money, NPR's award-winning podcast that finds creative, entertaining ways to make sense of the big, complicated forces that move our economy. She joined the team in October 2019.
Support the next 80...
DONATE NOW!
Donate Now!
Contribute by 5:35pm on Tuesday and you'll be automatically entered to win a $150 gift card for Sports Basement
LEARN MORE
Welcome (Back) to Mannys
Tune in for a Three-Part Series about the Future of San Francisco. Thursdays in May at 6pm.
LISTEN