As medicine prolongs our lives, there's a shortage of doctors who help us die

The average life span has nearly doubled during the last century.  But while people are living longer, they're now facing health challenges that were less prevalent before—severe chronic illness, cancer, lung disease, dementia, and Alzheimer's—debilitating conditions that often cause great pain and suffering.

For many people nearing the end of their lives, palliative care—relief from pain and suffering—is not readily available.

The scenario many people fear is being kept barely alive in their final days or weeks, attached to machines with IVs stuck in their arms, feeding tubes to help them eat, ventilators to help them breathe.  That’s not the most comfortable setting for patients who’d prefer a peaceful end to their lives. Most people would like to avoid hospitals in their last days of life.

The role of hospice in promoting end of life care

For the last 60 years, hospice has provided an alternative to the sterile hospital environment.  Zen Hospice Project in San Francisco, where the goal is comfort care, is peaceful and quiet, even though it’s located in an old Victorian in the heart of the city's downtown.

Luca Singer, diagnosed with terminal brain cancer, has lived there for the last three weeks. Luca’s brain tumor causes him sharp pain and he suffers from heavy depression, but housed in a room with large bay windows filled with natural sunlight, he calls the hospice his “healing sanctuary.”

Luca is receiving palliative care—pain medication to help manage his discomfort and gentle ministrations to address his psychic and spiritual pain.

"I feel like royalty and I feel spoiled from the moment I wake to the moment I go to sleep," says Luca, "I couldn’t be in a better place.”

He adds, “The people here just magical, loving, caring people.  The vibration here is healing and the food’s amazing."

Good food is part of the comfort care provided by Zen Hospice Project.  The kitchen staff prepares specially prepared meals, tailored to each resident's needs.  Luca looks forward to his meals every day and calls the food "high-end restaurant quality."

Palliative care is more than just pain relief and medications.  A person at the end of life often experiences a host of other issues like stress, anxiety, fear of death, or depression.  When the hospice movement first started in the 1960s, it pioneered the team approach that addresses the whole person.  Team members usually include a doctor, nurse, chaplain, and social workers, all working together with the patients at the center of care.

"What we attempt to do is be present with the person," says Zen Hospice Project Director George Kellar. "Don't rush anything, don't force anything.  Just see what unfolds, where they're comfortable.  ‘May I touch you?  Would you like me to hold your hand?  Would you like your feet raised?  Are you warm?’  Or just be quiet and that unfolds into a communication."

The Importance of communication

Good communication is a key part of providing comfort care.  As patients near the end of their lives, it’s important for them to talk about their goals and wishes with the medical team.  Do they want their lives prolonged as much as possible?  Or would they prefer comfort care?

The problem, says Dr. V.J. Periyakoil, Director of Palliative Care, Education, and Training at Stanford University School of Medicine, is that doctors often don't communicate effectively with their patients.

“So what happens is the default takes over," she says. "When patients get sick, they call 911, they end up in the emergency room.  If they’re seen as pretty sick, they then get escalated to the Intensive Care Unit, and then all sorts of procedures and treatments are given.  Because all this happens in a very short and very intense time, there is not time to press pause and say ‘What matters to you?  What do you want?’”

End-of-life care received very little attention when advances in medicine took off in the 50’s and 60’s.  Curing illness and disease became the focus of modern medicine and as a result, people lived longer and better than at any time in history.

In 1995, a ground-breaking study funded by the Robert Wood Johnson Foundation surveyed 10,000 terminally ill patients and found that at least half of them experienced unwanted pain and suffering after weeks of expensive, ineffective treatments.

The study’s results were a wake-up call for the medical system, but the response was slow.  Most physicians and nurses currently in practice have little or no formal training in basic end-of-life care. As recently as 20 years ago, most medical schools still did not offer courses in end-of-life care.

But times are changing.  Today, palliative care training is offered by almost all medical schools. California has made significant progress in supporting and expanding palliative services in medical schools, hospitals, and hospices.

"We are definitely better than we were 20 years ago," says Periyakoil.

Despite the progress, though, Periyakoil argues there's still a long way to go.

She says, “Recently, the Institute of Medicine did a 20-year follow up on looking at the state of end-of-life care in the U.S. and found some major gaps that need to be addressed before we can actually claim that we are very good at providing care for patients at the end of life.”

There’s a serious shortage of palliative care specialists. For every 1,200 terminally ill patients, on average there’s only one specialist available. Not too many physicians choose to specialize in fields like palliative care and gerontology—the pay is too low compared to other specialties like cardiology or plastic surgery.

Resisting the urge to do more

Dr. Jessica Nutik Zitter works at Oakland’s Highland Hospital in the Intensive Care Unit (ICU), chosen because of her initial interest in saving lives.  Zitter is among the few ICU physicians who also specializes in palliative care.  She sees a lot of trauma on her shifts, from gunshot victims to AIDS patients and homeless people.  She writes about her ICU experiences in her New York Times blog posts.

In a recent post, Zitter wrote about a homeless woman near death, found under a bridge in Oakland.

"Crucial organs were failing," writes Zitter, "Her liver was almost completely shut down....her brain was profoundly and irreversibly damaged....the cells of her [brain] were swollen and dying.  And there was no chance of reversing it.  She would never again wake up."

When Dr. Zitter arrived in the ICU that day, the medical staff was doing everything to keep the woman alive as long as possible, inserting large catheters in her veins and starting drips, even though she was near death.

"This woman really had lived hours past obviously where she would have lived, had she not received this very intensive care," says Zitter.

She sat down with her staff to discuss stopping life-prolonging treatments, but it was not an easy conversation.

"If you start backing off and saying 'c’mon team, let’s sit down here and talk about this—how’s this really going to help?’  People are kind of uncomfortable with that," says Zitter.

After consulting with her staff, Dr. Zitter made the decision to stop all further treatments and tests and gave the woman pain medication to ease her suffering.  She died within the next few hours.

When it's time to stop

Often the problem that confronts doctors is when to stop the heroic measures if continuing further treatments is clearly futile, and what to tell patients and their families when asking for consent.  In the case of Rebecca Mitchell's mother Tess, her doctors didn't want to be the bearers of bad news.

Tess had Stage IV lung cancer and was hoping to beat it with chemotherapy.

"Every doctor we saw during that period of time, they seemed positive, encouraging," says Rebecca. "It was like ‘Okay, we’ve seen this before, we’re going to try this, we’re going to do this, this has worked before in the past.’”

But Tess' cancer had metastasized and was spreading everywhere.  Her body was failing and she was in and out of the ICU.  Despite evidence to the contrary, her doctors continued to remain optimistic and Tess held out hope that she could survive another five years.

Jessica Zitter was Tess' doctor during her last visit to the ICU.  Rebecca was present when Dr. Zitter gave her mother an honest assessment, that her chances for long-term survival were not good.

"Honestly, I think we all knew that," says Rebecca, "Even the doctors in the ICU knew that.  It just took somebody to acknowledge that.  It’s okay to say ‘there’s an alternative to this.’”

Tess made the decision to stop further treatments.  She went home and received palliative care through hospice until she passed away a month later.

“I think she was just happy to be out of there and coming home and not have to find the energy to get dressed and do some new procedure or to get treated for something else," says Rebecca, "That was a relief for her.  Why would you want to go in a hospital bed or in a hospital room alone and fighting or hooked up?  She just took control and said ‘I’m going to go home, I’m going to do the things I want, and when it’s time to go, I’m just going to fall asleep and not wake up.’”

Universal access to palliative care is still a long way off, but major health care systems, medical schools, and state health officials are taking steps to improve end-of-life care, making palliative training and services more widely available than ever before.

Palliative care advocates are hopeful the medical system will move toward the holistic model pioneered by the hospice movement: patient-centered care that uses good communication with team work.

JoAnn Mar's report is part of the End of Life Radio Project, supported by a grant from the Association of Health Care Journalists and The Commonwealth Fund. 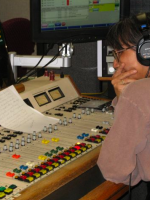 JoAnn Mar
JoAnn Mar is a veteran radio announcer, producer and host of Folk Music & Beyond, heard every Saturday from 3 to 5 pm. In her spare time, she is a radio documentary producer/journalist. Her news reports and features have aired on NPR, Voice of America, The Charles Osgood File, Pacifica Radio and AARP's series Prime Time Radio. Topics covered include prisons, end-of-life, women's issues, the plight of immigrants and public education.
See stories by JoAnn Mar
KALW is supported by