Danielle Fuentes Morgan On The Revolutionary Power Of Black Satire

Danielle Fuentes Morgan is the author of “Laughing to Keep from Dying: African American Satire in the Twenty-First Century.”

Her book explores Black satire — its evolution, and its legends. She says satire was used for social commentary, but also as a revolutionary action — to affect change, and as a survival mechanism — to cope with centuries of discrimination, inequity, and racism. And that goes back to the days of slavery.

"Let me shock you into understanding this, let me unsettle you. Because I'm feeling unsettled. Because I feel uncomfortable in this kind of situation, I want you to understand that feeling as well."

Here's a transcription of her conversation with KALW's Hana Baba:

Danielle Fuentes Morgan: His former master asks him to come back to the plantation after emancipation and he says, "Look, I’ll pay you. I just need help on the plantation." And he writes this really scathing rebuttal that gets published in the newspapers. Saying you know, "Yeah, I’ll come back if you promise to pay me all my back wages and pay my wife all her back wages." And, "Oh by the way they call her Miss up here now. And just ragging on him in this really brilliant way."

And it reminded me that when we are talking about slavery and enslaved people, that we really need to think about all the different ways to survive, there are so many different ways to die. You can have these physical deaths, a mental death, and a psychic death, and the enslaved were smart enough and resilient enough to come up with methods to survive that. And I think that is critical for us thinking about what twenty-first century satirists are doing as well.

Hana Baba: You also talk about the idea of valuing Blackness, right, that modern satirists must speak from a place that kind of pushes deeper, you know, and provides more critical understanding of race and racial relations. Can you talk a little bit about that?

Danielle Fuentes Morgan: Black people, as communities, I think have always known, you know, there's lots of different ways to be Black. But in the mainstream, we often see that as kind of performed as one thing like you're supposed to look this way, you're supposed to act this way. You're supposed to like these certain things. These satirists are saying, No, I'm Black. And because I'm Black, the thing I'm doing is Black as well. That's authenticity. And I think that's a really, really nuanced kind of move that allows so many of us different ways to identify and to identify ourselves as Black people.

Hana Baba: You just reminded me of an interview I did with the comedian W. Kamau Bell. Oh, yeah. He was talking about, you know, he grew up in white spaces. He is a self-described, like, Blerd: Black Nerd. Yeah, you know, he didn't speak the way Black people wanted him to speak. And like in the comedy circuit, you know, he would be expected to talk a certain way and to talk about certain things that just were not his experience. And that got me thinking about audience. Can I be authentic to myself? And this, I think, extends itself to satire and comedy as well. Versus are these people gonna get it or not?

Danielle Fuentes Morgan: Absolutely, absolutely. Yeah, I think that is so critical. Right now, because part of what satire needs is intention and impact. Intention outweighs impact to my mind. So the satirist has to intend to create a satire, you can't sort of make a joke, and then later on, go back and say, "Oh, no, it was just satire because it didn't go over well, you're supposed to actually intend for it to be received as satire." But the trick then is that the audience has to understand it has to have that impact as a satire. You want people to feel uncomfortable, but in that productive way, so that, you know, I always tell my students, that our discomfort is a space for production, that it can be a really productive space that we want to feel uncomfortable, but not unsafe.

Hana Baba: So I guess my next question is, who do you think, you know, manages to pull that off?

Danielle Fuentes Morgan: What I'm really interested in right now is the satirists who have made moves very specifically to talk about this kind of contemporary moment. I have to say, Jordan Peele is doing just incredible work, just mind blowing, like, I feel fortunate, honestly, that I am working in the realm of satire. At the same time that Jordan Peele is creating satire, because what he's doing in the realms of comedy in the realms of horror is just so brilliant. I think the movie, Get Out, of course, to my mind, Get Out is the film of the Trump era, it came out right around the inauguration. And it was talking, you know, it's really like our first, our first glance at what Trump's America was, you know, what it might look like? And this kind of idea of, "Hey, we're going to talk about racism, but not in the ways you think about it. You know, these racists aren't you know, I say, this is somebody from Durham, North Carolina, these racists aren't Southern they don't have these accents. They're very well educated, they're attractive, all of these things that usually in pop culture we see racist as being, you know, sort of like these caricatures. He didn't do any of that. So it became this really interesting way to say but what about all of the racism that happens everywhere? Let's not just locate it in the South. What about in upstate New York? What about in, you know, Oregon, what about in all of these other places where we see it all the time, but we say, "Well, at least you're not in Alabama. At least you're not in Mississippi." All of these places that kind of get dumped on as racist epicenters.

Danielle Fuentes Morgan: Sure. So one of the things that I talked about in the book is Chappelle suddenly leaving his show in the early part of the 21st century. He just kind of leaves, very famously walks away from this $50 million contract and goes to Africa for a while. The sort of mainstream narrative about this was you know, Dave's lost his mind. You know, this kind of, like very shallow understanding of why somebody might walk away from this, you know, incredible amount of money. What Chappelle actually said about that is the fact that he heard a crew member laughing.

Hana Baba: Right, it was the Pixie skit.

Danielle Fuentes Morgan: Yeah, the racial Pixie, so he's in full black face, you know, dressed as kind of a, like a zipcoon minstrel. And he, you know, he hears somebody laugh, you know, white stagehand laughing, and it sort of triggered in him. The sense of none of this, you know, I don't think my comedies have that impact. So again, this goes back to what you and I were talking about with the question of authorial intent, but also the impact on the audience that audiences have to recognize it as satire. Chappelle wasn't sure anymore. And so he leaves as a result of that. To my mind, that really demonstrates an understanding of what his satirical intent was that it wasn't just about getting the joke off, it was about the meaning behind the joke that the laughter needed to be structured in a way that made him feel comfortable. If he just wanted the laugh, then, you know, whatever reasons this crew member was laughing is fine. But he wanted a laugh that had some sort of satirical, meaning what I described as revolutionary laughter, which is this kind of laughter that, you know, it's funny, so you're laughing, but you're also thinking about how it challenges the status quo, that your laughter means that you recognize that the status quo is a problem.

Hana Baba: In looking at the future of black satire, what do you see happening?

Danielle Fuentes Morgan: I think right now satirists are really moving away from the funny to the serious, and whether that series takes on the forms of, you know, sort of straight dramas or horrors or something else, I think, right now. And I think this is in part in response to the traumas of the Trump era that satirists are saying, “Okay, I need to make sure that my meaning is not misunderstood.” And sometimes that takes the form of, "I need to not make a joke and hope that you can tease through the laughing to understand that meaning. That it's become much more of the sort of, "Let me shock you into understanding this, let me unsettle you. Because I'm feeling unsettled. Because I feel uncomfortable in this kind of situation, I want you to understand that feeling as well." And so that's where I think satire, that's where it seems satire is heading, sort of the shift away from comedy into this sort of overly funny. We see this with Jordan Peele, we see this with Chris Rock, who is often now asked to sort of just speak on behalf of the black community sort of writ large. We see it with the kinds of comedy that Dave Chappelle is entering into. We see it you know, with the the sort of public responses of Leslie Jones or Maya Rudolph, or any of the, you know, very few Black women who have been on Saturday Night Live as they're kind of moving away from sort of traditional comedy and leaning in more to have sort of political sphere that people are really trying to, that they're recognizing that there's a spotlight on satirists, and that they want to make sure that meaning is as clear as possible.

Hana Baba: Okay who's doing it right right now, and who are you excited about?

Danielle Fuentes Morgan: I am really, really excited about Isa Ray. I think "Insecure," while not a traditional kind of satire has these satiric moments, where she's being really, really thoughtful about the intersections of race, gender, sexuality, class, all of these kinds of things, and being really respectful, but also pushing the boundaries of all of these kinds of identities as well. So she's somebody I'm really excited about right now, I'm still excited to see sort of the next iterations of what Jordan Peele is going to do. There is a stand up comedian named Sam Jay, who I think is just hilarious and thoughtful, and boundary pushing that I think, is going to really make huge waves. They have a Netflix special, but I think Sam Jay is somebody to look out for. But I think the way comedians are going into these kinds of darker moments as they talk about comedy, and really sort of saying, Hey, I have a voice, I have an opinion. I think it's critical. I also think because we are all homebound right now, because of the pandemic, that a lot of these comedians who are on TikTok, and who are making these web series and who are making little videos that they post to Twitter and Instagram, that some of these people who are making these kinds of jokes that are sort of self-made, and grassroots are also going to be huge changemakers in the realm of satire in the next couple of years, and I'm really excited about that. 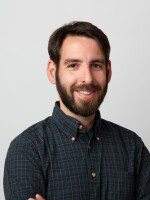