In 2012, Eric "Maserati-E" Abercrombie picked up the guitar and has been performing ever since. Today, the producers talk about the music that helped them through some of the most difficult moments of their life, and what tools they use to channel and understand their own pain.

This past August, he was released, at age 25. Now, he’s performing regularly.

"I don't have to necessarily have to say a word, but once I play the guitar, play the piano, anything like that, it's like I'm letting it all out."

The interview with Maserati-E was first aired on June 24, 2019 with the headline “Maserati E plays music to cope with his brother’s death.”

Subscribe to Uncuffed in podcast players. Learn more at WeAreUncuffed.org.

KALW’s radio training program in California prisons is supported by the California Arts Council, with funding from the California Department of Corrections and Rehabilitation. The producers fact-check content to the best of their ability. All content is approved by a prison information officer.

Tags
Crosscurrents From The Producers Of Uncuffed 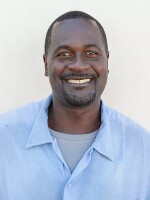