Work with Marty Nemko, 12/6/18: A debate: Is Universal Basic Income a Good Idea?

Universal basic income, sometimes referred to as UBI or guaranteed basic income is an often-proposed approach to dealing with widening income inequality and the ever-growing threat of jobs being offshored and automated, UBI  has been embraced both some on the Left, the Right, and by Libertarians such as Milton Friedman...and it has been opposed by some on the Left, Right, and libertarians. To help explore the issue fairly, I’m pleased to have recruited a knowledgeable advocate of UBI: Andrew Yang, who is running as a Democrat for President of the United States in 2020 and whose #1 campaign issue is his advocacy of UBI.  And we have a knowledgeable opponent of UBI: Marc Joffe is a senior policy analyst for the Reason Foundation and an opponent of UBI who wrote an article in the Fiscal Times called: Universal Basic Income: An Idea Whose Time Should Never Come.

Here's the planned structure. It's what I call a modified debate. Debate's plus is that it encourages a clash of ideas. Its minus is that neither party attempts to be statesmanlike, only to win. This modified format encourages the best of both:

Opening statements: 2 minutes each. The pro-UBI side will go first to reduce audience confusion.

Free exchange between the two of them for 10 to 15 minutes or so, keeping each comment concise and civil, so no one person dominates, and also cknowledging each other's good points.

Closing statements: 90 seconds each. Again, pro-UBI first to avoid confusion. These should not be preplanned but an ad hoc summary reflecting the discussion, including good points made by your opponent.

In the program's second segment, listeners can call in for a Workover. Whatever the work problem--I'll do my best to help.

Work with Marty Nemko is heard every Thursday from 7 to 8 PM on KALW 91.7 FM and worldwide on KALW.org.

The podcast of the show is available free on NPR.org, iTunes, and in perpetuity on this web page. 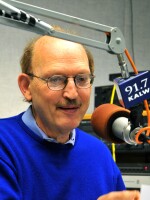