Tuesday’s The Deadline To Get Monarch On Threatened Species List

Tomorrow could be a very important day for the future of a beloved Bay Area insect. On Tuesday the US Fish and Wildlife Service is set to decide if the Monarch butterfly will be given protection under the Endangered Species Act.If you grew up in the Bay Area before the 1980s you likely had first hand experience seeing the Monarch butterfly’s life cycle up close in your elementary school classroom. You probably also feel like there were a lot more of the orange and black winged butterflies in the air. That’s because there were.

Early numbers from the annual Western Monarch Count show that California’s migratory population is at an all time low, with possibly fewer than 10,000 monarchs overwintering in the state this year.

Scientists say the decline in monarchs is caused by a number of factors — from pesticide use, to more severe weather, to habitat loss.  In 2014, conservation groups petitioned that the insect be listed under the Endangered Species Act. Now the Fish and Wildlife Service, under the Trump administration, has until Tuesday to announce their decision.

The new status would add teeth to efforts to protect the species. 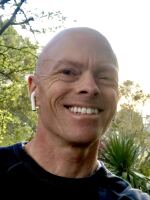 Scott Carroll
(he/him/his) I’m a second-generation Berkeley native. I feel lucky to have grown up in an area with a rich non-commercial and alternative radio scene. As a kid I hid a transistor radio below my pillow, exploring across the dial, long after bedtime. I got to work in radio production with KDVS at UC Davis while getting a degree in Wildlife Photography and Writing in the late ‘80s and early ‘90s. Documentary film and television production was my main work after college. Volunteering with the Gay Men’s Health Collective of the Berkeley Free Clinic, deepened my interest in science and health advocacy, and drew me into work and further studies in public health. In addition to the Bay Area I have lived and worked in Washington, DC, Central America and Mexico. I’m currently involved helping free clinics across California and I’m a medical student educator in several Western states. I love hearing and sharing people’s stories and working to help make lives better. I’m very happy to be learning and practicing journalism and audio production with KALW.
See stories by Scott Carroll
Latest from NPR
Voices from behind prison walls.
A show made by people behind bars in California prisons.
Listen now
This Season on TSE: Becoming Muslim
Check out the latest season about Muslim converts and past seasons of stories of struggle and never giving up hope.
Listen Now