In July, U.S. District Court Judge Joseph Spero banned Oakland Police from using so-called “less-lethal” weapons, including rubber bullets, and severely limited the use of pepper-spray. This came after the Police controversially used these tactics on protesters in May and early June. The court also ordered that no other law enforcement agencies could bring these banned weapons to Oakland.

Why would other police officers be in Oakland? Police departments often ask nearby cities to lend them officers to help manage large scale demonstrations, in what are called ‘mutual aid agreements.’

In October, with a contested election looming, the City Oakland asked the federal judge to ease these restrictions, after multiple local law enforcement departments said they would refuse to help the city if they couldn’t use these weapons.

Alameda County Sheriff Gregory Ahern, for example, wrote to OPD and explained that he would not provide assistance because without these weapons, he feels his deputies risk injury. Several Bay Area municipalities expressed similar reservations.

On Saturday, with the election just around the corner, Judge Spero agreed to ease the restrictions for outside officers in certain cases.

Protests are planned for downtown Oakland on Wednesday at noon and into the evening. 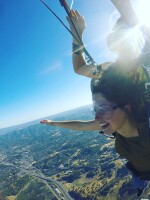