San Jose is trying to build trust with its residents by limiting what the police can do with license plate information. The ban includes selling data, using license plates to investigate immigration status, and monitoring protests or rallies.

KALW spoke with Bob Nunez, the president of the San Jose/Silicon Valley NAACP, who is concerned that the City Council hasn’t spent enough time researching where the data actually goes.

He says that if license plate reader companies own the data instead of police, residents are still at risk. Nunez, along with other privacy rights advocates, are asking the City Council for more transparency.

San Jose plans to install an additional 150 readers across the city, but officials haven’t said when they will install those cameras. 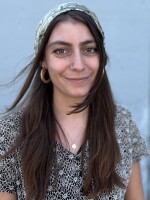 Alia Taqieddin
Alia is a Seattle-raised, Oakland-based cultural worker, DJ, and community archivist, inspired by and belonging to a lineage of Palestinian and Arab women storytellers. She is interested in documenting the histories and contributions of West Asian and North African immigrant communities in the Bay Area. Alia's past audio work can be found in the Arab American National Museum, which houses her multimedia oral history archive of Dearborn, Michigan. In her free time, Alia enjoys hosting her monthly online radio show, Kan Ya Makan, on Moonglow Radio, and DJing various SWANA (Southwest Asian/North African) dance parties in the Bay Area.
See stories by Alia Taqieddin
Bay City News Service
See stories by Bay City News Service
Latest from NPR
Voices from behind prison walls.
A show made by people behind bars in California prisons.
Listen now
This Season on TSE: Becoming Muslim
Check out the latest season about Muslim converts and past seasons of stories of struggle and never giving up hope.
Listen Now