Once an underground celebration of LSD, 'Bicycle Day' is now mainstream

These days, a lot of people know that April 20th – 420 – is a day people celebrate cannabis. Less well-known in the calendar of drug-related holidays is the day before, April 19th. It’s known as Bicycle Day, and it started as a quiet, subversive celebration of LSD. Now, Bicycle Day is celebrated around the world. As LSD and other psychedelics are becoming more mainstream, this year’s Bicycle Day in San Francisco included a conference to discuss psychedelic medicine's use in therapy, research, art, indigenous cultures, and decriminalization. Reporter Jonathan Davis attended Bicycle Day San Francisco to learn more. 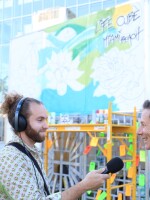 Jonathan A. Davis
Jonathan A. Davis is an award-winning journalist, radio storyteller, and podcast producer. Prior to his work as a freelance reporter and producer, he was an associate producer on KALW’s feature podcast “The Intersection.” Jonathan worked in management consulting and with several non-profits before coming through the radio ranks with KPFA and KALW. Telling the world’s stories through the magical medium of audio and the oral tradition is an honor for Jonathan. You can find out more about him and his work at radio.jdavis.online
See stories by Jonathan A. Davis