Re-Entering The Outside World After Prison Isn't Always So Easy

From the series Uncuffed:

Andrew Peralta spent two decades in some of California’s most dangerous prisons -- including time in solitary confinement, known as the “SHU.”

Inside, he was confident. But when he was released back into the free world, fear and confusion gripped him like an icy blizzard. Peralta spoke with Uncuffed producer b.f. thames, about some of the things that intimidated him about freedom, and how his difficulty adjusting led him on a path back to incarceration.

“It seemed like no one paid attention. There was no civility. At every moment, if something happened people would just turn; they could get violent.”

Uncuffed is produced by people in California prisons. Hear more stories like this by subscribing to Uncuffed in podcast players: WeAreUncuffed.org

KALW’s radio training program in California prisons is supported by the Transformative Arts program, a partnership between the California Arts Council and the California Department of Corrections and Rehabilitation. The producers fact-check content to the best of their ability. All content from inside is approved by an information officer.

Uncuffed is changing the narrative about people in prisons. Support our work here.

Tags
From The Producers Of UncuffedCrosscurrents 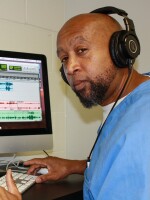