Invisibilia: Do His Sunglasses Keep Him From Seeing The Light?

Editor's note: This story is part of the latest episode of NPR's show and podcast Invisibilia, exploring the power of clothes.

When he was in middle school, something happened to Casanova Frankenstein that happens to a lot of kids. On the bus home from school, another boy started making fun of him. As soon as they got off the bus, the kid sucker punched him right in the face. Frankenstein dragged himself home through the snow and crawled into bed. When his mom came into the room later that night, instead of comforting him, she said, "If you ever come into this house again and you lose a fight, I'm gonna get you. You hear me?"

Winning those fights wasn't going to be easy. In the early '80s, Frankenstein was a kid trying to make it through school on the South Side of Chicago. He didn't play sports. And he had what he thought was as an incriminatingly dorky birth name: Albert Melvin Frank III. And he wore glasses — glasses that framed cartoonishly sweet puppy-dog eyes. So given his limited options, he decided he would turn to clothes to save himself.

We often think the shirts or shoes or accessories we put on every morning will make us cooler, or more confident or more professional. And sometimes we are right. But sometimes the clothes change us in ways we don't expect, or may not even want.

In Frankenstein's case, he desperately wanted the clothes to make him someone the other kids wouldn't pick on. He tried a pair of motorcycle boots, a pair of trendy Air Jordan sneakers, even a varsity letter jacket. After watching a movie about an Army-jacket-wearing kid whose classmates thought he was a psychopath, he dug up his dad's old Army jacket and wore that to school, too.

But none of these worked. "If you grow up in the South Side of Chicago, the last thing you're worried about is a Vietnam vet," he says. "You just look like you're broke."

And then one day while shopping for new glasses, Frankenstein noticed a pair of large tinted frames in the display case. They went from dark magenta at the top to warm pink at the bottom. And he wondered: Could these be the answer? "In the black community, guys that wore sunglasses, man, they were sharp! They were cool!" he recalls.

He told everyone they were tinted prescription glasses. And just like that, the bullying miraculously ended. Usually it doesn't work this way. Usually we discover a hard limit to the power of clothing. But for some reason in his case, all of the tripping, all of the textbook slapping, all of the hiding of clothes in the locker room and spitballing — it just stopped. With those tinted frames hiding his eyes, he says, "I was like a ghost almost. And I know that sounds strange, but it was like people did not really notice me."

Frankenstein is 48 now, and a lot has changed since high school. He has tattoos. He's changed his name to Casanova Frankenstein, Cass for short. He's an artist who had a somewhat popular underground comic in the 1990s. And for many years, his day job was working as a custodian for the University of Texas in Austin. But what hasn't changed in all of these years is the sunglasses. He has an impressive collection hanging by his bed.

"I wear them when I'm lying down in bed — yeah, everywhere."

But he doesn't care what people think because he genuinely believes that sunglasses have a kind of magical power. He's even tried to quantify just why they work so well, writing a paper on the effects of wearing sunglasses after dark where he tells his story and speculates on how sunglasses might help protect bullied kids.

It's a careful layman's parsing of how wearing sunglasses changes the emotional dynamics of a situation. He explains, for example, how "by avoiding pack placement, you tend to avoid male conflict and contests of aggression." Or how shielding the eyes can provide cover to people who need it. "You can't see a person cry if [they are] wearing dark glasses," he points out.

He says it's "like being able to look at the world through a telescope or from behind a wall."

But the sunglasses might also keep Frankenstein from seeing things he really might like to see. Two years into his second marriage, he didn't remember that his wife, Beth, had blue eyes, not brown. Which raises the question: Is there anything about wearing sunglasses that Frankenstein, in his conviction, can't really see?

Beth Wiley, now his ex-wife, says that during her marriage to Frankenstein she had this saying: "The world is only as dark as the sunglasses you see it through." Constantly wearing sunglasses gave Frankenstein a darker view of the world, she thinks. The sunglasses made strangers and even her friends more standoffish toward Frankenstein, and that, in turn, made him see more of the negatives in others. "I just felt like I spent a lot of the relationship preparing for people to be assholes," says Wiley.

Kristen Bunyard, Frankenstein's close friend of 20 years, agrees that the sunglasses sometimes function as a wall. "It's hard to have a conversation with someone for several hours and you can never really see their eyes," she says.

So perhaps the sunglasses are imprisoning him in a brutal high school version of the world and obscuring the truth, which is that grownups are generally nicer than kids?

"I mean at the risk of sounding rude or insensitive, nobody's bullying a 50-year-old guy, especially not in Austin," Bunyard responded. "And I think that the majority of people he surrounds himself with are all people he loves and who love him. And he is safe with all of us. I wish he felt like he could take them off."

Back in his apartment, safe from the outside world, Frankenstein disagreed with these ideas. "The only reason why they want to see my eyes is to see if I'm lying to them," he says. "I'll take my glasses off and then I'll talk to you, and see if there's any difference."

Frankenstein placed the sunglasses carefully on the bed. Suddenly there was a transformation. His fluttering brown eyes were rimmed with curly eyelashes. The man who just a moment ago was so sure of himself now looked naked and vulnerable. Even his voice had changed. "As I said, I get kind of flustered when I'm not wearing sunglasses, don't know exactly what to say because my shield is down," he says. "So it's a matter of their comfort over my comfort."

He talked for 30 more minutes without the sunglasses on and then the interview ended. Frankenstein put the glasses back on and once again, everything changed. He was back to cracking jokes, dancing, even singing. "Heavens, I love the dark. I adore the darkness!"

With his glasses on, he stood outside his front door and he seemed prepared, excited even, to venture out. 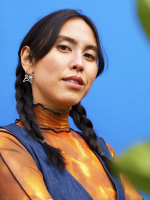 Yowei Shaw
Yowei Shaw is co-host and editorial lead of NPR's Invisibilia. Her work on the show has taken listeners into the uncomfortable world of racial preferences in dating and whether you can change them, an unlikely love story in martial law era Taiwan and a Midwestern town sharply divided in how it sees wild black bears.
Community Resources
Updated Daily
Connect
Sponsorship for Local Businesses
Special rates and packages
Learn More
Submit Your PSA
Please review KALW's PSA Guidelines, then use the form below to submit your request. KALW holds final editorial approval for all PSAs. If your…
View Form
Latest from NPR
Topics